I’ve been a user of Windows since the version 3.0, but this weekend I finally broke up with Windows. While there were plenty of times Windows had frustrated me in the past (Vista anyone?) the debacle that is Windows 8 was the final straw, and I’m pretty confident I’m never going back.

TL;DR: if you’re sick of the piece of shit that is Windows 8 (if I wanted to buy a tablet, I’d buy a damn tablet), and you don’t use MS Office (or can use LibreOffice or Google Docs instead), you should definitely move to Ubuntu. It is now ready, faster, better and easier to use than Windows (and probably has been for a while).

A Tale of Two OSs

For the first half of my time using computers (early 90’s to mid 2000’s), Windows was clearly the smart choice. While many friends in college in the late 1990’s were Mac die-hards, even they knew their decision was more a religious than an intelligent choice – they rejoiced in their cause of “resisting the borg” while all the time being frustrated at all the things they couldn’t get on a Mac.

For the second half of my time using computers, Mac has undergone a resurgence. While the latest stats show Mac with only 7% of market share for desktops, any visit to a tech conference will show non-Mac users in a minority. Now I find myself being the holdout on grounds of belief and principle – the thought of supporting the closed and restrictive practices of Apple has held me back from joining the legion of other tech professionals moving to Mac (for reference, Microsoft at their worst never tried to control the software you could load on a device you own and have paid for – and while the Mac retains freedom for now, the App store model of control and 30% cuts continues to push its way into desktops).

To be fair, Windows 7 was a pretty decent operating system. I see more rainbow spinning balls on my friend’s Macs than the lockups and blue screens of death than I ever saw on my Windows 7 laptop, but more importantly, in the last 5 years I’ve pretty much stopped caring about or seeing the operating system – I pretty much live in my browser and everything that matters lives in the cloud in one way or another.

After completely blowing its head-start in mobile touchscreen technology (I remember buying a Windows Phone 2003 smartphone back in the early 2000’s) due to corporate infighting and bureaucracy (see Kurt Eichenwald’s brilliant story, “How Microsoft Lost Its Mojo: Steve Ballmer and Corporate America’s Most Spectacular Decline” in Vanity Fair), Steve Jobs finally had Microsoft spooked.

By 2012, with the runaway success of the iPhone over the last 5 years and the iPad gathering steam with more than 60 million sold that year, Microsoft made a fatal mistake with their design decisions on Windows 8: instead of improving on Windows 7 and introducing options to be more tablet-friendly, they yanked too hard on the wheel and crashed the Windows franchise into the cliff. 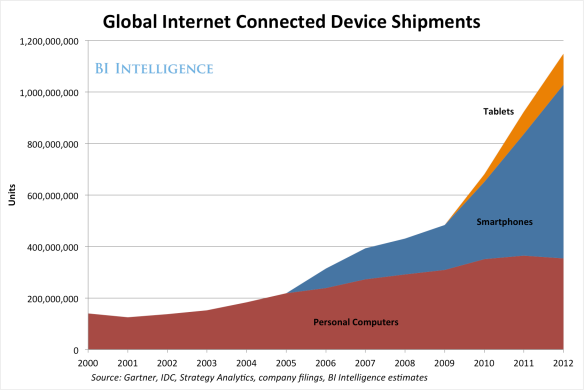 To prove to the market Microsoft was serious about the threat posed by tablets – which have since proven themselves to be more entertainment systems and toys than places to do work – they decided to destroy the user experience of desktop Windows (used by 1.3 billion people around the world with more than 90% market share still) to chase the shadow of the tablet market (of which Windows makes up only 6% of a market, and after rapid initial growth the whole market is now slowing significantly). 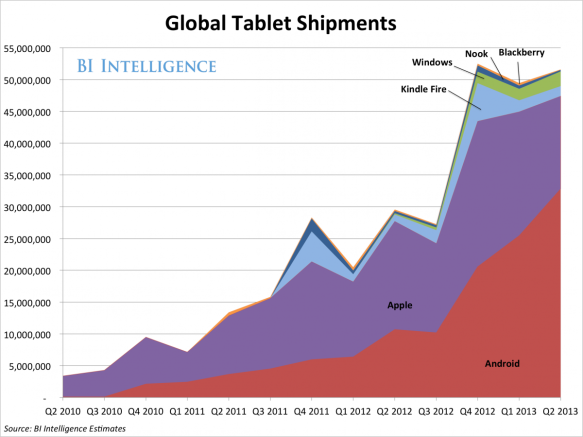 The irony is incredible; a year after his passing, the legacy (or ghost) of Steve Jobs had caused Microsoft to make one of the biggest blunders I’ve seen in corporate history: Windows 8.

While Julie Larson-Green wore the blame for the disastrous decision to replace the Windows start-menu, there were many more problems with Windows 8 – and all of them made me feel like I was being poked deliberately in the eye so the company could chase the tail-lights of a ghost.

Windows 8 took so many steps backwards in terms of usability it is hard to believe the company could have made so many mistakes with just one release.

The most obvious egregious example of Microsoft’s decision to deliebrately f*ck the customer was the Start Menu. Remember, an operating system exists to run other applications on top of it – and even when Windows 8.1 bought the start menu back, just starting an application was painful. Here’s what it was like Hipchat:

If you’re trying to use Skype, prepared to get extra fucked. There’s two of them. Why? If I’m confused, God help the regular punter.

Users of Windows since forever will be familiar with the “Control Panel” or settings screen. It still exists in Windows 8, but it is one of many screens to be “Duplicated” with a more tablet-friendly full screen display. There’s a second “PC Settings” section, with different features. Getting out of it when you’re done will wear out your ESC key.

It is bad enough when you have to find something that has moved in a new version, but it is even worse when it half moved and you need to learn two different placed just to make things easy for a non-existent customer base. Just finding help is a nightmare – and spare a thought for the poor technical writers at Microsoft who now have twice as many docs to keep up to date to cover the same help content (search for “Windows 8 change resolution” for some fun).

While all of those frustrations could be offset (the awesome Launchy app meant I hardly ever had to use the Start Menu, and settings hopefully only have to be used occasionally), I was reminded every single day about the lunacy of Windows 8 when I looked at my second screen: it was always blurry.

Windows 8 introduced a compulsory feature related to how it renders apps on high-resolution screens. My second screen’s native resolution was 1920×1080 (HD), and under Windows 7 everything looked crisp and normal.

After plugging in my new Windows 8 laptop into the screen, I found all of the fonts fuzzy and blurry. Aside from being ugly, my poor eyes were constantly trying to focus – I felt the strain. This wasn’t just annoying – this was unhealthy. It turned out the “solution” was to right click on an app and disable high DPI scaling or some such shit – this is 2015, and it worked find a week earlier on Windows 7 on the same damn monitor – but this just made all of the fonts janky and jagged. So, blurry or jagged were my two choices, because after all, Microsoft were chasing Retina display and wanted to optimize for Angry Birds on a fucking tablet.

I remember first trying to switch to Linux as my desktop OS back in the late 1990’s with RedHat 6 (Cartman), and the reality was it always required more work to get running (and keep running) than it was worth given my schedule. I really just wanted an operating system to operate – run apps, don’t crash, support the hardware with drivers so I can use the machine I’ve bought – and didn’t have the spare time after starting my first business in early 2000 to mess around with recompiling my own kernels and messing around with driver mods.

I avoided the Vista upgrade, and was happy to move to Windows 7 when I needed to upgrade my machine, but the forced upgrade to Windows 8 was a nightmare. After putting up with Windows 8 for over 3 months of continual frustration (especially for my poor eyes), I decided enough was enough – I was either going to move to Ubuntu or “upgrade” to the earlier Windows 7 (which wasn’t an option when I bought the laptop – thanks Samsung).

The result was nothing short of incredible. Within 30 minutes of inserting my USB drive in my laptop (with the live installation of Ubuntu loaded on it – super easy with UNetBootin), I was up and running with a fully loaded Ubuntu 14.10. It detected all of my hardware out of the box, and aside from a few shortcomings with missing function key toggles I didn’t ever use in Windows anyway, I’ve got a perfectly working laptop.

Free At Last, and So Much Faster

The feeling of being free from Windows is hard to explain.

Firstly, as a software developer who still codes regularly, relying on Windows was always a source of some shame, and increasingly a cause of frustration. While the irony of being a software developer on a Mac and thus supporting Apple’s policies of restricting who can use and run your creative output is something many others seem to be blind to, the reality is that OSX’s underlying BSD architecture is much more developer friendly. As a result, being a minority (software developer running Windows) meant that more and more tools (especially around Git) and tutorials were targeted to Mac users specifically; also an irony given the way Mac was an unsupported outsider platform for decades. Being on Linux has opened up the most developer-friendly tools I could ask for – and I’m already loving transitioning to them.

Secondly, as a performance user, I really appreciate things being fast. My currently laptop (Samsung ATIV Book 9 with an i7 processor, 8GB of RAM, SSD for storage) is a pretty powerful piece of kit for the price ($1400), but I often found myself waiting and frustrated with Windows 8.1. With this new Ubuntu setup, my laptop feels twice as fast. I don’t know if it is the lack of bloatware, the lower amount of OS overhead or something else, but my laptop is so much faster than it was this time last week.

Thirdly, as someone who’s bet everything on the cloud and browser-based interfaces, the ability to completely change operating systems on a Saturday afternoon and spend a weekday at the office not missing a single thing is pretty incredible. While I know that Google Chrome was going to come across fine and be the gateway into almost everything I need/use, I was pleasantly surprised to find Hipchat’s desktop app working well as a native Linux app, and most surprisingly of all, Skype for Linux being significantly better than its Windows cousin.

But the fourth and most important reason personally was that by continuing to use Windows 8, an operating system designed from the outset to poke the 1.3B+ desktop Windows users in the eye to justify Microsoft’s delusions and need to chase Apple’s tablet-tail-lights, I was giving them permission for all their bad deeds. As the dominant desktop OS vendor, they could continue to f*ck the customer and I was someone who put up with it – inertia was too hard to change. If staying with someone who beats you up gives them tacit permission to keep beating you, I wasn’t prepared to support it anymore. And I’m looking forward to helping my friends and colleagues escape too.

In summary, unless you have to use specific features that are only available in Adobe, Word or Excel or some other productivity tool, I can’t see a reason why you’d stick with Windows 8. While Microsoft are promising candy like Cortana (talk to your computer like Siri/Startrek – should be all sorts of fun in an office) with Windows 10 in 6 months or so, given what Microsoft have done with prioritizing a failed mobile strategy over the interests of their desktop users (and it is failed and done – Android is the new Microsoft with the vast majority of market share, and Apple is the new, um, Apple), I recommend upgrading to Ubuntu today – Linux is ready for you, and you won’t regret switching.