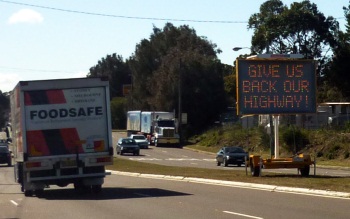 A campaign, backed by donations from members of the Fix the Princes Hwy at Heathcote Facebook group, has gone live this morning, with a large display sign installed at Heathcote to let some of the 25,000 people who use the Princes Hwy a day what the so-called Minister for the Illawarra, Paul McLeay, as well as Roads Minister Borger have done by stopping the RTA’s plan to implement a clearway at Heathcote.

Update: The Minister has used his political influence to try and shut down our protest, with senior staff at the RTA telling the Traffic Signs manager at Kennards to remove the sign “or else”. Funny, I’m told the IGA – one of the noisy minority – was allowed to put a sign there advertising their business, but we’re not allowed to inform the public. Looks like the Minister doesn’t believe in people’s right to protest and wants to stop the people of the Illawarra from realising how he has actively intervened in the planned clearway at the expense of tens of thousands of his constituents.

Update 2: After being requested by the RTA to move the sign, the guys from Kennards went along to comply, but it turns out they were too late. No word yet on whether it was the RTA or one of the noisy locals who nicked the sign, but you can be certain that there’s some serious people who don’t want us to know the truth about how we’ve been betrayed and screwed over.

Update 3: The Minister says he didn’t ask for it to be moved, but that isn’t to say one of his flacks didn’t on his behalf. By trying to disable the sign with hammers and towing it without unchaining it, the RTA have done a few hundred dollars worth of damage – morons. Anyway, after a few day’s worth of repairs, and getting permission to put the sign on land that the RTA doesn’t own, we’ve got it back out on the road for the next two days. All in all, a good dress rehearsal for next March.

The messages on the sign-board are as follows:

Unfortunately, this probably won’t be our last action on this issue because very few of us have any confidence that McLeay has any courage at all to do the right thing and reverse his crazy decision. If the situation at Heathcote drives you mad too, join our Facebook Group.